Materials and Methods: A retrospective chart review was completed for all patients undergoing LG or PEG placement at a single academic center between 2007 and 2014. Patient demographic and comorbid factors were compared using Chi square or Fisher’s exact test. Continuous variables were compared using Mann-Whitney and Student’s t-test to account for normality of distribution. To control for underlying differences between patient groups, results were stratified by those features significant on univariate analysis. Logistic regression was utilized to identify independent predictors for complication.

Results: 94 patients were evaluated including 49 PEGs and 45 LGs. Univariate analysis revealed only a history of cardiac surgery and frequency of a concurrent tracheostomy differed between study groups. There was a trend to more frequent previous abdominal surgeries in patients undergoing LGs, but this was not significant. Return to the operating room was more common in patients undergoing a PEG tube with 4 patients (10%) requiring operative intervention for a complication compared to none in the LG. In the PEG group 2 patients returned to the OR for a dislodged PEG in the early post-operative period, 1 patient had a PEG placed through the colon, and 1 patient had a negative exploratory laparotomy for an acute abdomen the day following PEG placement. There were no conversions to open gastrostomy in either the PEG or LG groups. There was no difference in 30-day mortality between operative groups.

Conclusion: In our experience, PEG placement had higher rates of return to the operating room compared to LGs. Our study did not reveal any significant predictive factors associated with this complication; however the increased frequency of dislodgements seen in PEGs may be related to lack of surgical fixation of the stomach to the abdominal wall or design difference of the tube. Further study is needed to identify predictive factors for these complications to identify which patients would benefit from LG placement. 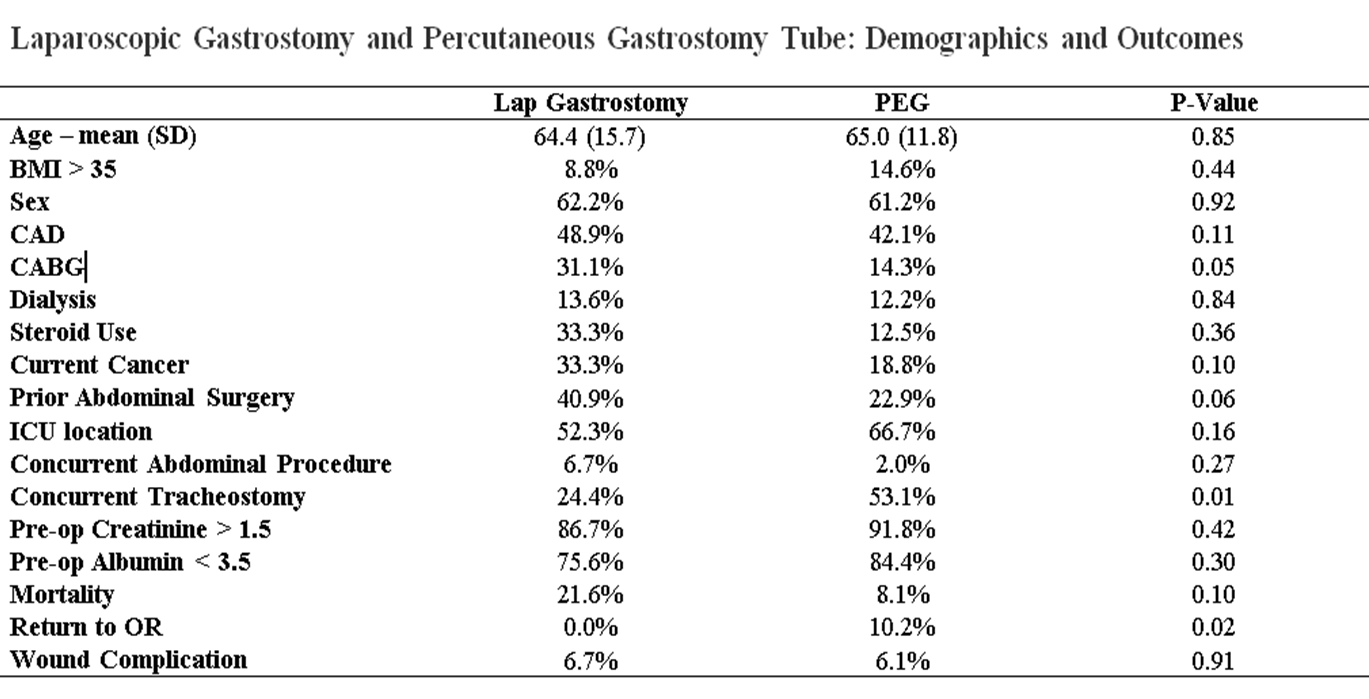