Racial Variation in the Distribution of Demographics, Body Mass, and Weight-related Medical Co-morbidities Among the Morbidly Obese: Analysis of 5,389 Bold Database Patients.

Objective/Background: The purpose of this study was to identify variations in weight, BMI, and obesity co-morbidities among the most severely overweight patients. As the obesity epidemic grows, morbidly obese patients with the highest BMI carry the greatest risk of severe weight-related medical problems. However, the effect of race on the distribution of these conditions in the morbidly obese is unknown.

Methods: Data from the Surgical Review Corporation’s BOLD database on 5,389 patients who were about to undergo open roux-en-Y was analyzed retrospectively in four groups: African-American (n= 503), Caucasian (n=3,769), Hispanic (n=460), and Other (Pacific Islands, Native American, or >1 race recorded; n=652). Five Asian patients were too few to analyze. Age, weight and Body Mass Index (BMI) were compared by analysis of variance. Dichotomous variable distribution was assessed by the Chi-squared equation.

Conclusions: Among the morbidly obese patients, severe co-morbidities are common, and vary widely by racial classification. Weight and BMI are greatest in African-American. Sleep apnea is highest among Caucasians and African-Americans while Hypertension in Others. Diabetes and hyperlipidemia are most frequent among African Americans and Caucasians. The oldest patients are Caucasians and Others, and the rate of depression is greater amongst Caucasians. It is no coincidence back pain appears to be high across all racial groups as it is most likely affected by high weight and BMI across all racial groups, in addition to other associated co-morbidities. Clinical suspicion for these race-related clinical factors should be heightened in managing morbidly obese patients. It is important to take into consideration these findings and co-morbidities when considering medical and/or surgical treatment plans for the morbidly obese population as they can have significant impact in the final outcome of how patients respond to an open roux-en-Y surgical intervention. Attention to these findings may facilitate pre-surgical preparation, and could help optimize obesity outcomes. 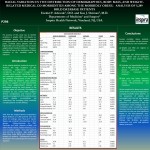