Background
Since 2009 we had performed Single Incision Laparoscopic Cholecystectomy(SILC) in 110 cases. We recognize this procedure for patients to prefer to. But SILC have several problems for example difficult handling under laparoscope and high cost. Then we had constructed the new procedure(Needlescopic Cholecystectomy:NC) to use the B.J.needle (2.1mm thin forceps) in order to operate by easy handling and in low cost. So, we compared SILC procedure with NC procedure in the prospective study.
Methods
The study enrolled 30 patients who had biliary colic and documented gallstones or polyps and would like to undergo so-called single incision laparoscopic cholecystectomy from April 2011 to August 2011 in the day surgery center of our hospital. They randomly assigned them to one of two groups (SILC:n=15 or NC:n=15). Data measures were operative time, estimated blood loss, length of hospital stay, adverse events, and conversion to 4 port laparoscopic cholecystectomy or laparotomy. Additionally, pain, satisfaction and cosmetic scoring was performed by the patient over the 1 month follow-up.
Operative procedure
SILC: Through a vertical 20mm navel incision a SILS port was set up. A scope, a straight forceps and a bended forceps were inserted into the abdominal cavity through the navel port. And via right upper abdominal skin with a needle device the bottom of gallbladder was lifted up.
NC: Through a vertical 15mm navel incision a scope and a 5mm straight forceps were inserted. And the B.J.needle forceps (2.1mm) was inseted through the right upper abdominal wall. So under triangular formation we could operate. Via other right upper abdominal wall a needle device was inserted to lift the gallbladder.
Results
No cases in the both groups had adverse events and were converted to other laparoscopic approaches or laparotomy. The two study groups did not differ in terms of patient demographics.
The SILC group had a statistically significant longer operative time than the NC group (70 vs 58min), but no difference in operative blood loss and hospital stay. And there was no difference in the pain score, satisfaction, the cosmetic score. The SILC group was higher cost to use siposable goods than NC group (128000 vs 76200JPY).
Conclusion / Perspective
Compared with SILC, NC is a feasible approach with comparable operative outcomes. NC is shorter operative time than SILC because of more natural handling and is lower cost. So NC offers a safe alternative to SILC. 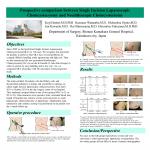