Introduction: Natural Orifice Translumenal Endoscopic Surgery (NOTES) has emerged as a promising minimally invasive surgical approach. Extracting the gallbladder through an endoscopic overtube during NOTES cholecystectomy avoids potential obstruction or injury to the esophagus. This study sought to determine whether preoperative ultrasound findings could be used to predict successful passage of a gallbladder specimen through an overtube.

Methods: Gallbladder specimens from patients undergoing laparoscopic cholecystectomy were examined under an IRB approved protocol. After the dimensions of each specimen were recorded, an attempt was made to pull the specimen through a commercially available, 16.7mm (inner diameter) overtube. A radiologist blinded to the outcomes, retrospectively reviewed all available preoperative ultrasounds from patients whose specimens had been examined. Ultrasound dimensions including gallbladder length, width, depth, thickness, and common bile duct (CBD) diameter were recorded. The radiologist also noted the presence or absence of gallstones; when stones were present, the radiologist attempted to measure the size of the largest gallstone (LGS). Multiple logistic regression was performed to determine whether ultrasound findings and patient characteristics (age, BMI, and sex) predicted the ability of the specimen to pass through the overtube.

Results: Specimens from 57 patients were examined. Forty-four patients (35 female, 9 male) had preoperative ultrasounds that were available for electronic review and were included in the analysis. Mean ± standard deviation for age and BMI were 42 ± 12 years, and 32 ± 8 kg/m2. Ultrasound dimensions for gallbladder length, width, depth, and wall thickness were 80 ± 17mm, 35 ± 12mm, 28 ± 10mm, 3 ± 1mm. CBD diameter was 4 ± 2 mm. Gallstones were absent in 11 patients, and present in 35. In patients with gallstones, measurement of LGS was successful in 23 patients with a mean diameter of 12 ± 8mm. LGS was indeterminate (IGS) in the remaining 12 patients due to artifact from multiple stones. Eighteen gallbladders were perforated during the operation. Rate of passage for perforated versus intact gallbladders was not statistically different (40% v. 23%, p = 0.054 with Fisher’s exact test). Weight, BMI, LGS, and IGS were predictors of passage through the overtube on univariate logistic regression. However, only LGS (Odds ratio 1.167, 95% confidence interval 1.023-1.332, p = 0.021) and IGS (Odds ratio 22.965, 95% confidence interval 1.986 – 265.629, p = 0.025) were significant predictors of passage on multivariate logistic regression. Passage rate was 80% when LGS < 10mm or no stones were present, 18% when LGS was greater than or equal to 10mm, and 8% with IGS (Pearson Chi-Square, p value < 0.001). 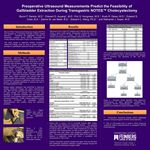