Introduction: Colorectal cancer (CRC) remains the third leading cause of cancer-related deaths in the United States and Canada. Colonoscopy is the current gold standard for detection of CRC, but given an estimated error rate between 11% and 21%, surgeons are often faced with uncertainty in the operating room, particularly in laparoscopic cases. While the rate of screening colonoscopy has increased significantly over the past 15 years, little is known about the current rate and indications for preoperative repeat endoscopy for CRC.

Objectives: We examined the perceptions and attitudes of general surgeons and trainees practicing in Ontario regarding re-endoscopy prior to elective CRC surgery and identified associated factors related to this practice.

Methods: A survey with 17 questions was distributed among the participants of two national Canadian meetings and through a provincial repository of practicing general surgeons. Univariate analysis was performed using the Chi-squared test. Weighted ranking of indications for repeat endoscopy was calculated using the Borda Score. Logistic regression analysis with a backward elimination of variables was used to determine factors associated with repeat endoscopy. A two-sided p-value of less than 0.05 was considered statistically significant.

Results: 175 questionnaires were completed representing approximately 25% of all general surgeons and trainees in Ontario. The majority of respondents were fully trained surgeons (70%), male (74%), with 5 to 20 years of experience (42%), in a non-academic practice setting (53%). In terms of volume, 53% reported that they had performed more than 200 colonoscopies in the preceding 12 months, while 65% performed less than 20 elective colorectal surgeries in the past year. 45% of respondents indicated that >50% of their elective colorectal cases were performed using a laparoscopic approach. Preoperative planning and tattoo localization were the top two indications for re-endoscopy. The majority agreed that repeat colonoscopy prior to surgery had minimal impact on time to definitive surgery (64%) and that the findings of a repeat colonoscopy resulted in a change in the operative plan (56%). Univariate analysis demonstrated that surgeons in an urban setting (OR 2.111, p=0.038) and within a teaching facility (OR 3.069, p=0.003) were more likely to perform repeat endoscopy. Furthermore, surgeons with a high volume colorectal practice (OR 3.041, p=0.002) and who frequently employed a laparoscopic approach (OR 4.295, p<0.001) were more likely to offer repeat colonoscopy in the preoperative setting. In contrast, additional provider demographics including gender or years in practice did not influence the likelihood of re-endoscopy. In the multivariate analysis, all identified factors maintained significance except for a surgeon’s primary practice setting (OR 0.887, p=0.797).

Conclusion: Colonoscopy, while the gold standard used in the detection of CRC, has a significant error rate in tumor localization. This study demonstrates that surgeons practicing in a teaching hospital with a high volume elective colorectal practice and who favor a laparoscopic approach are more likely to perform repeat colonoscopy prior to elective surgery. Further research is needed to formulate practice recommendations that guide the use of re-endoscopy and to identify circumstances where it may be safely omitted. 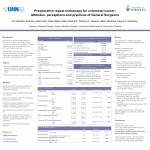