Introduction: Achalasia is a chronic and progressive disease affecting the myenteric plexus of the esophagus and lower esophageal sphincter. Treatment is aimed at palliating symptoms to improve quality of life. The treatment of symptom relapse after esophagomyotomy includes: botox injection, repeat myotomy, POEM, calcium channel blockers, or Pneumatic Balloon Dilation (PBD). In our center, we treat most symptom relapse with PBD. There is very little data demonstrating the safety and efficacy of PBD in this setting in the literature. We review our experience over the last 10 years.

Methods: A retrospective review of all patients who underwent PBD for recurrent symptoms of achalasia after esophagomyotomy from 2007 – 2017 was performed. PBD was performed at 3, 3.5, and 4 cm held for 60 seconds under fluoroscopic guidance. Only those patients with residual symptoms after dilation to 3 cm had subsequent dilations at the greater diameters. Our primary outcomes were complications and need for subsequent intervention (repeat PDB, repeat myotomy, or esophagectomy). We also report Eckardt scores prior to PBD, presence of hiatal hernia, time from myotomy to recurrence of symptoms, and modalities used to diagnose achalasia. Quantitative data is presented as median and interquartile range. 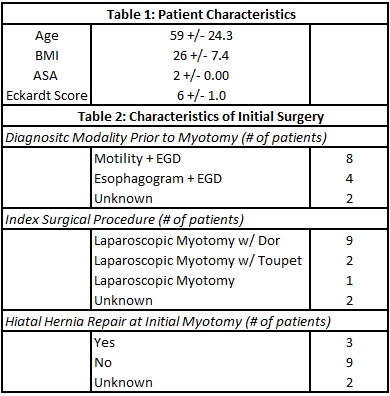 Results: 58 esophagomyotomies were done for achalasia during the study period. Fourteen patients (50% male) underwent PBD for recurrent symptoms during the study period. Patient characteristics at the time of PBD and details of the patient’s primary esophagomyotomy are shown in Tables 1 & 2. The median time to recurrence of symptoms after esophagomyotomy was 28 months (range 2 – 151 months).  Only 1 patient had a hiatal hernia at symptom recurrence and this was de-novo. Ten of 14 patients had an intervention between the initial surgery and PBD (9 standard dilations and 1 Botox injection). A total of 22 PBD were done. Seven patients required a subsequent dilation at 3.5 cm and 2 patients required a dilation at 4 cm. Eleven patients had significant improvement in symptoms and required no further intervention after PBD. Of the 3 treatment failures, one went on to have a repeat esophagomyotomy and 2 had no further treatments. All 3 failures had significant esophageal aperistalsis on manometry. There was no grade 2 – 4 Clavien-Dindo complications for any of the 22 PBDs.

Conclusion: Serial PBD is a safe and effective treatment for recurrent symptoms of achalasia after esophagomyotomy with a low rate of subsequent re-intervention.