Purpose: Angiostatin and endostatin are endogenous inhibitors of angiogenesis that have been shown to have anti-cancer effects. Major surgery has been associated with significantly elevated plasma VEGF and Angiopoetin 2 levels for the first 3 weeks after colorectal resection. Furthermore, human plasma from the second and third Post-operative week has been shown to stimulate in vitro endothelial cell proliferation and migration rates when compared to culture results with preoperative plasma. Thus, the patient is in a pro-angiogenic state early after surgery. Surgery’s impact on perioperative angiostatin and endostatin levels is unknown. This study’s purpose was to determine the periop levels of these two proteins in colorectal cancer (CRC) patients undergoing minimally invasive colon resection (MICR).

Methods: Plasma endostatin levels were assessed in 34 CRC patients while angiostatin levels were determined for 30 CRC patients. Blood samples were taken preoperatively (PO) and on postoperative day (POD) 1 and 3 in all patients; in a subset samples were also taken between POD 7-20. The late samples (POD 7-13, POD and 14-20) were bundled and considered as single time points. Plasma angiostatin and endostatin levels were determined via ELISA in duplicate. For the endostatin data the median value and the 95% Confidence intervals are provided and the Wilcoxon signed rank test was utilized. For the angiostatin data the students t-test was used after logarithmic transformation of the data to a normal distribution (data reported as mean +/-SD, significance, p 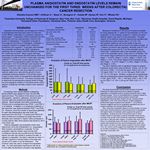