We describe a new technique of ventriculo-gallbladder (VGB) shunt placement in which the gallbladder is accessed completely percutaneously. Classically, the insertion of VGB shunts has been described via an open surgical technique. A subcostal incision is used to enter the abdomen, and in a stamm-gastrostomy type fashion, the gallbladder is brought to the anterior abdominal wall and the distal end of the shunt catheter is secured to the gallbladder via a purse-string suture. Though this technique is feasible in the majority of patients, it can be challenging in the “hostile” or multiply operated on abdomen.

Our technique does not require open abdominal access. We have utilized this technique for two patients with “hostile” abdomens, that precluded direct surgical access. Both patients had failed ventriculo-peritoneal (VPS), ventriculo-pleural and ventriculo-atrial shunting on multiple occasions. VGB shunting was the next best option.

The procedures were performed in conjunction with the Neurosurgery team at our institution. After ventricular access was obtained, the distal portion of the VGB shunt was tunneled subcutaneously onto the anterolateral abdominal wall to a site identified, sonographically, as appropriate for gallbladder puncture. Under ultrasonographic guidance, the gallbladder was percutaneously accessed with a 15cm Jamshidi needle trans-hepatically. Gallbladder puncture was confirmed via aspiration of bile and instillation of Isovue contrast; the remainder of the procedures as performed under direct fluoroscopic visualization. A guide-wire was advanced directly through the needle into the gallbladder until 15cm of wire was coiled in the gallbladder. The needle was removed, a small skin incision was made to accommodate a dilator, and a dilator and peel-away sheath were advanced over the guide-wire into the gallbladder. The dilator and wire were removed leaving only a peel-away-sheath in place.

The catheter was then cut to length so that 35cm of catheter from the skin puncture site was available. Under fluoroscopy, the catheter was advanced into the sheath until coiled in the gallbladder. The peel-away sheath was removed leaving the catheter intact. Catheter placement was confirmed by repeat fluoroscopy and ultrasound. The dilator site was closed with monocryl sutures. Both VGB shunts are currently functional. Both patients are without complications from shunt placement at one and eight months.

Percutaneous VGB shunt placement is a novel technique that can be utilized in patients with hostile abdomens, who have failed standard CSF drainage procedures. VGB shunts are considered a viable option due to gallbladder sterility, resorptive function, and biliary catabolic action on cerebrospinal fluid proteins.

The technique we described is minimally invasive and does not require extensive adhesiolysis. Like other percutaneous procedures, our technique avoids the need for an open abdominal incision, shortens recovery time and post-operative pain, and given the rapidity in which it can be performed, minimizes time under anesthesia. This technique is ideal for patients who have failed standard shunting procedures, and who have had multiple abdominal operations. Long-term catheter patency remains to be determined. 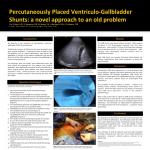