INTRODUCTION: Despite technical refinements of percutaneous endoscopic gastrostomy (PEG), complications remain static. These complications include bleeding, tube site infection, and tube dislodgement. Tube dislodgement occurs more frequently in high risk patients such as those with altered mental status. The morbidity associated with early tube dislodgement is significant and often requires surgical exploration for gastrotomy repair and tube replacement. There is also risk of sepsis secondary to intraabdominal contamination. The purpose of this study is to review the experience from a high volume endoscopy center following the introduction of T-fastener placement in high risk patients. We hypothesize that procedure related morbidity will decrease when T-fasteners are used in patients with early tube dislodgement.

METHODS: We retrospectively reviewed PEG placement over the preceding 12 months (October 2010—September 2011) when our group began to selectively use T-fasteners in high risk patients. Patients with altered mental status deemed to have an increased risk for early tube dislodgement underwent T-fastener placement at the time of PEG placement. Charts were retrospectively reviewed and patients with PEG alone were compared with those patients who had PEG with T-fastener (PEG-T). Statistical analysis was performed using SPSS version 18.

RESULTS: A total of 195 patients underwent PEG placement during the study period. PEG alone was performed on 121 patients, while PEG-T was performed on 74 patients. Mean age for PEG alone versus PEG-T was 64.2 +/- 15.1 and 71.0 +/-15.2 years respectively (p=0.001). Indication was feeding access in 102/119 (86%) patients who had PEG alone and 68/74 (92%) who underwent PEG-T (p=0.12). The other patients had PEG placement for decompression. Neurologic deficit (i.e. cerebrovascular accident, dementia) was identified in 64/121 (53%) with PEG and 58/74 (78%) with PEG-T (p<0.01). In an attempt to further identify an increased risk for early tube dislodgement, a clinical assessment involving communication with nursing teams as well as review of the electronic medical record was performed. There were 7 complications overall. In the PEG cohort, 1 patient had intraluminal bleeding requiring repeat endoscopy. Six patients had early tube dislodgement in the PEG-T cohort versus none in the PEG cohort (p=0.003). Mean time to tube dislodgement following PEG placement was 5.0 +/- 6.3 days. The first patient underwent diagnostic laparoscopy with replacement gastrostomy 2 days following tube dislodgement and was noted to have no contamination and an intact gastropexy. The subsequent 5 patients underwent non-emergent PEG replacement in the endoscopy unit within 48 hours of tube dislodgement. In short term follow-up, no repeat dislodgements were noted. Overall mortality at last follow up was 38/195 (19.5%) and was related to underlying disease.

CONCLUSION: Neurologically impaired patients constitute a high percentage of adults undergoing PEG placement. Subtle clues such as need for restraints prior to PEG may alert the clinician of a higher risk for early tube dislodgement. Placement of T-fasteners in this group may decrease overall morbidity if early tube dislodgement occurs. We have shown safety in non-emergent replacement of PEG in such patients. Need for PEG in adults remains a marker for mortality. 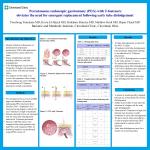