Introduction: The study aims to investigate if surgical technique, wound contamination or interaction between both are predictive of adverse outcomes following emergent ventral hernia repair. We hypothesize that patients repaired with permanent mesh or no mesh would have higher incidence of wound infection, readmission to hospital and recurrent hernia when compared to patients repaired with biologic mesh. There is uncertainty as to how patients with emergent ventral hernia repair are optimally managed. Concern for infection has resulted in some surgeons performing only primary repair while others chose to use biologic mesh. Some surgeons also use permanent mesh despite higher risk for infection.

Method(s): An IRB approved retrospective review of 176 consecutive patients operated upon emergently for ventral hernia in a community teaching hospital between 2005 and 2010 was performed. Presence of infection, readmission to hospital over 5 years, and recurrent hernia were recorded. Differences in the incidence of these outcomes were compared using 2-way ANOVA

Conclusion(s): The use of biologic mesh was associated with reduced incidence of readmission, recurrence and wound infection following emergent ventral hernia repair. Contamination increased the risk for these adverse events. These differences, however, were not statistically significant. These data argue that a prospective randomized control trial  is justified to test this hypothesis. 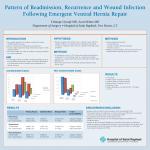