Outcomes of Laparoscopic Colorectal Surgery in the Elderly

INTRODUCTION: Laparoscopic surgery was demonstrated to be safe and effective for the treatment of colorectal cancer also in elderly patients. Data from National Registries have shown how population is getting older and living longer. Since the incidence of colorectal disease increases with age, a large number of elderly patients will require colorectal surgery. In octogenarians requiring colorectal operations, emergency procedures are more common, blood transfusion, complications and postoperative deaths occur more frequently, and hospital stay is longer. Later-stage disease and comorbid conditions are responsible for the higher incidence of cardiopulmonary complications. Recent reports, however, have recommended applying the standard surgical approach also in the elderly. The advanced age, itself, only minimally increases the operative risk. Octogenarians tolerated elective colorectal surgery as well as younger patients and could potentially benefit from minimally invasive surgery that is associated with less cardiopulmonary stress, early rehabilitation, and faster return to independent status. The aims of our study is to assess the characteristics and perioperative morbidity and mortality in elderly patients submitted to laparoscopic colorectal resection

METHODS AND PROCEDURES: Between July 2006 and July 2011, a total of 352 patients underwent laparoscopic resection for colorectal cancer. The intention of surgery in all cases was curative if at all possible; no difference in surgical approach was made less than and more than 75 years. Primary outcomes were the evaluation of morbidity and the perioperative death, occurring within 30 days after an operative procedure. The patients and procedural risk factors included sec, age, cancer localization, Dukes’ and TNM classification, blood transfusion and POSSUM score. Morbidity and mortality rates were calculated according to the Kaplan-Meier method.

RESULTS: The study consisted of 186 men and 166 women. 77 patients (21.8%) were more than 75 years of age. The more than 75-year age group had tumours that were predominantly right sided in location. Moreover, it appears that the patients more than 75 years of age presented with advanced Dukes’ and TNM stage tumours than those younger than 75 years (63% C or D and 64% stage III or IV, compared with 44% and 43% in the less than 75 years). Although the length of ileus and hospital stay were longer in the elderly group, the difference did not meet statistical significance. Blood transfusions were significantly associated with the elderly and mostly related to preoperative anaemia; two patients required reoperation for postoperative hemoperitoneum. Further analysis among anastomotic leakage showed two documented leakage in the less than 75-year age. In relation to POSSUM mortality score, a median value of 2.3% and 8.5 % were registered into the two age-groups. Any post-operative mortality was registered in the elderly.

CONCLUSION: A review of the literature demonstrate a number of short-term advantages of the laparoscopic approach. However long-term results remain unclear. As a results of our experience, minimally invasive colorectal surgery might be a safe and effective solution in elderly patients, provided that a good selection of patients, a tight intraoperative monitoring and an intensive postoperative rehabilitation are planned and followed. 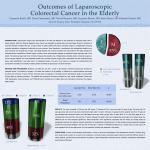