Laparoscopic distal gastrectomy (LDG) with dissection of the regional lymph nodes has become a common procedure among endoscopic surgeons. But it has still some technical difficulties in dissecting lymph nodes at the supra-pancreatic area especially for beginners. To reduce this difficulty, we have stuck to coaxial scope setting.
Our procedure is shown as follows:

1. A 12-mm trochar was inserted below the navel for a laparoscope. Four 5-mm trochars were inserted in the upper right, median left, left abdomen and middle right abdomen. One 12-mm trochar was inserted in the middle left abdomen. In total, six trochars were used in this procedure.
2. The operator was located between patient legs and the monitor was located over the patient head. Under laparoscopic view, the greater omentum was cut by LCS. The left gastroepiploic vessels were clipped and cut by LCS and the dissection for lymph nodes along the left gastroepiploic vessels was made. The right gastroepiploic vessels were clipped and cut by LCS and the inflapyloric lymph nodes were dissected. The duodenum was cut with an endoscopic linear stapler.
3. The lesser omentum was cut and the right crus of the diaphragm was exposed. The lymph nodes along the proper hepatic artery was dissected and the right gastroepiploic vessels were clipped and cut by LCS. The inflapyloric lymph nodes were dissected. The common hepatic artery and the splenic artery were exposed, and the lymph nodes along these vessels were dissected. The left gastric vein was clipped and cut by LCS. This procedure was performed under excellent surgical view by pulling up the gastropancreatic folds to the anterior abdominal wall and pushing the pancreas gently. The lymph nodes around the left gastric artery and the celiac artery were dissected. The left gastric artery was divided after double-clipping. Then the dissected lymph nodes were attached to the resected stomach and the stomach was cut by the endoscopic linear stapler.
4. The duodenogastrostomy was made with a method of intracorporeal gastroduodenostomy, the delta-shaped anastomosis, in which only endoscopic linear staplers are used. After the anastomosis was made, the resected stomach was taken out from the body through the widened nabel port site.

We have performed LDG with dissection of the regional lymph nodes (D2) for gastric cancer patients. Dissecting lymph nodes at the supra-pancreatic area was safely performed in our procedure with coaxial scope setting, because the operator could see the lesion in front of him in the coaxially set monitor over the patient head. This setting was also helpful to the procedure in the intracorporeal gastroduodenostomy. 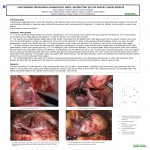