Opinion Survey on Operative Management of Adhesive Small Bowel Obstruction: Laparoscopy Versus Laparotomy in the State of Connecticut

Introduction: Intra abdominal adhesions are responsible for 49-74% of small bowel obstruction [SBO]. Traditionally, open lysis of adhesions [OLA] is the treatment when conservative measures fail. Recent literature has shown safety of laparoscopic lysis of adhesions (LLOA) in treating adhesive SBO. In addition, length of stay and costs are less with LLOA. Despite these favorable outcomes, less than 15% of patients with adhesive SBO are managed with LLOA nationwide. We sought to know the opinions of surgeons in CT about their use of LLOA for managing adhesive SBO compared to OLA in terms of safety, contraindications, and outcomes.

For the 29% of respondents that considered LLOA unsafe, the reasons chosen were:

Conclusions: Many surgeons do not perform LLOA for reasons that are in contrast to the surgical literature, which supports LLOA. Surgeons who are recently trained and/or with membership in MIS societies are more likely to use LLOA. These data suggest that recent training, interest in and/or membership in MIS associations influence surgeons’ choice for LLOA. This survey demonstrates that there is an opportunity to improve patient outcomes with education about the merits of LLOA in the state of CT. 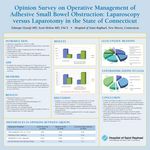