(Aim) To evaluate a new method of rectal irrigation and cutting in laparoscopic-low anterior resection for rectal cancer
(Apparatus) A clamp forceps for the rectal irrigation and the Y-shaped vinyl hood for the operation under airtight were made. The point of forceps is J character type, and the total length is 36cm. 22cm between the clamping part and the hinge and the length of the clamping part is 6cm. Y-shaped vinyl hoods that have 76cm in the total length, 60cm in the length of both sleeves, and 27cm in the width of both sleeves enables the instrument operation under the pneumoperitoneum. These apparatuses enable the single-stapling cutting of the rectum under the pneumoperitoneum with the automatic suture machine for the open operation.
(Technique) After the dissection of rectal anal side, the lower abdomen is cut by small incision, and the wound retractor was attached at the wound margin. Y-shaped hood was installed in this, the anal side of the lesion was clamped by J-shaped foreceps, and the irrigation was done under the pneumoperitoneum. The forceps was moved to the sleeve one of Y-shaped hood, and the automatic suture machine (Curvedcutter) is inserted from the other sleeve, and the suturing and cutting were done. Because the hand is outside of the body though it is hand for under the insufflation of the abdominal cavity assistance, it is called the Extracorporeal HALS method. This method was used in a case that the multiple stapling was expected in rectal cutting.
(Object and method) Sep2000 – Sep2008, The short-term results were compared between the DST that used two times and more of the automatic suture machine for the laparoscopy-assisted surgery with the E-HALS.
(Results) The multiple stapling were 106 cases, and E-HALSs were 27 cases. The short-term results of both groups did not have the difference. The anastomotic leakage was not different but the frequency of it in E-HALS was a little fewer (7.4% vs. 11.3% in the multiple stapling). The medical costs of the rectal cutting were significant (53,296 Japanese Yen in E-HALS vs. 92,594 Japanese Yen in the multiple stapling, the difference was about 370 dollars, P 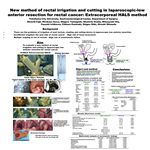