Natural History of the Gastric Diverticulum: A Retrospective Review of 87 Patients

INTRODUCTION: Gastric diverticula occur extremely rarely. Only small series have been published to date describing their presentation, natural course, and management. Case reports have suggested the potential for hemorrhage or malignant transformation. We sought to elucidate the natural history of the gastric diverticulum.

METHODS AND PROCEDURES: We reviewed 87 charts of patients with a diagnosis code of gastric diverticulum from 1998 to 2010. We recorded their presenting symptoms, imaging or endoscopy results, treatment offered, results of subsequent studies, sequelae or complications, current symptoms and length of follow-up.

RESULTS: Of the 87 patients found to have gastric diverticula, 39 (44%) were diagnosed on CT, 33 (37%) on EGD and 5 (0.01%) on UGI. The median age was 49 (range 39-87 years), and 77 (88%) were female. 84 (97%) of patients were Caucasian. 74 (85%) were found in the gastric fundus, 5 (6%) were located in the cardia, 6 (7%) in the antrum, and 2 (2%) in the prepyloric region. The mean size was 2.3cm (range 1-4.1cm). 85 (97%) did not have clear symptoms solely attributed to the gastric diverticulum. The most common symptom was epigastric pain in 36 (41%) patients. Other symptoms included heartburn, periumbilical pain, dysphagia, nausea, or eructation. One patient was offered a laparoscopic surgical resection, but the patient declined. 37 (46%) were also found to have a hiatal hernia, 57 (72%) had colonic diverticulosis, 42 (51%) had gastroesophageal reflux, and 29 (37%) had gastritis. All 87 patients had a solitary gastric diverticulum (one patient had a concurrent distal esophageal diverticulum, which was resected via thoracotomy). One patient was found to have a bleeding ulcer at the base of a prepyloric diverticulum, which was treated with clips endoscopically. None of our patients developed malignancy. The mean length of follow-up was four years after diagnosis (range 0.5-9.6 years).

CONCLUSIONS: In our retrospective review, we found that symptomatic patients often had confounding foregut pathology that could account for their complaints. All of our patients were safely observed without intervention. 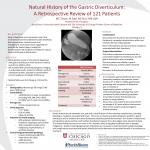