Introduction
Laparoscopic gastrectomy(LG) for gastric cancer is a complex and difficult procedure with a steep learning curve(experience of at least 50 cases). Most studies related to learning curve of LG comes from high volume centers (>50 cases per year) in endemic region like Japan and Korea. Experience of developing LG at a low volume center in non-endemic area like Taiwan is rarely reported. This study aimed to analyze the learning curve of an experienced general surgeon in performing a laparoscopic gastrectomy with lymph nodes dissection for gastric cancer at a low volume center in non-endemic area.

Material and Methods
Between Nov 2007 and June 2013, 78 patients had undergone a curative laparoscopic gastrectomy for clinically serosa-negative gastric carcinoma(cT1-3) by a single surgeon. In these patients, 1 patients underwent D1 surgery due to ESRD and CHF, and 8 patients underwent total gastrectomy were excluded. Other 69 patients were included and divided into 4 groups according to chronologic sequence. Multi-dimensional analysis was performed, including operation time, estimated blood loss, harvested lymph nodes, and complications.

Results
There was conversion to open in one patient(the 20th case) due to inadequate suprapancreatic lymph node dissection. The extend of lymph nodes dissection was D1 in 4 patients, D1+ in 44 patients, and D2 in 21 patients. Four patients combined other procedures. The reconstruction method was Billroth II gastrojejunostomy in 51 patients, and Roux-en Y gastrojejunostomy in 18 patients. The median operation time was 300 minutes. The median estimates blood loss was 80cc. The median harvested lymph nodes was 34.5, with two patients harvested less than 15 lymph nodes. The median time to first flatus and post-operative stay were 3 and 8 days. Eight patients experienced major post-operative complications. The harvested lymph nodes significantly increased after group 2(cases 18-34). However, the estimated blood loss and operation time achieved statistical significance after group4(cases 52-69)

Conclusion
Laparoscopic gastrectomy with standard LND is safe and oncologically feasible at a low volume center in non-endemic area. Experience of about 20 cases is necessary for getting appropriate lymgh node dissection. But shorter operation time and less blood loss would be achieved after experience of about 50 cases. 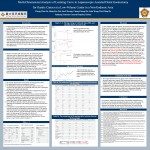