ABSTRACT: MIS Fellows should be able to master single incision laparoscopic (SILS) cholecystectomy after a limited number of cases.

INTRODUCTION: The competence of graduating general surgery residents in both open and laparoscopic cholecystectomy has been questioned for decades. As newer generations of general surgeons emerge, the move has been towards ambulatory laparoscopic cholecystectomy. However, some programs still lack minimally invasive surgery training. In recent years, more advanced, difficult minimally invasive techniques have surfaced. The question of learning curve and feasibility of ambulatory SILS cholecystectomy has come to light for graduating and currently practicing general surgeons. The purpose of this study is to evaluate the early experience and learning curve of a MIS Fellow in training in relation to ambulatory SILS cholecystectomy.

METHODS: A MIS Fellow with basic minimally invasive training, but no significant experience with SILS cholecystectomy, was evaluated during the first 15 consecutive ambulatory SILS cholecystectomies performed during fellowship training. There were no exclusion criteria for patient selection. Inclusion criteria were any patient with an indication for elective laparoscopic cholecystectomy, regardless of BMI and/or severity of cholecystitis. After a trial of several different SILS ports, a gel port(Applied GelPoint) was decided as the easiest to be used in training. A 75 degree grasper(Olympus) was used to retract the gallbladder cephalad. A 5 mm, flexible tip laparoscope(Olympus Endo-Eye) was used for all cases. All dissection was done using hook electrocautery. A posterior approach to dissecting Calot’s triangle was used. A 60mm, curved tip stapler(Covidien) was used to divide the cystic duct and artery. Additionally, no Keith needle was used to retract the gallbladder, making this technique a true SILS procedure. Operating times from incision to wound dressing were evaluated. Post-operatively, the patients were evaluated for conversion to open or standard four-port laparoscopy, any complications (death, cystic duct leak, bleeding, umbilical hernia, common bile duct injury, and wound infection), overall pain score, and patient satisfaction. All patients were discharged within 2-6 hours post-operatively.

RESULTS: A total of 15 ambulatory SILS cholecystectomies were performed over 10 weeks. The average operating time was 76±44-31 minutes After 8 cases, the average operating time decreased to 63±22-18 minutes. The fastest skin to skin operative time was 22 minutes, comparable to standard to four-port laparoscopy. There were no conversions to either open or standard four-port laparoscopy. There have been no deaths, no bile leaks, no bleeding, no umbilical hernias, no bile duct injuries, and no wound infections. The overall pain score for these patients has been less than or equal to 4, on a standard pain scale of 1-10. At follow-up, patient satisfaction was very high. Of the 15 patients, 6 were males. The average age was 46.9 years (range 18 years to 77 years), average height was 65.4 inches (range 60 inches to 70 inches), and average BMI was 27.8 (range 21.5 to 35.0).

CONCLUSION: With a basic fund of laparoscopic knowledge and technique, it is feasible for a Fellow to safely perform ambulatory SILS cholecystectomy with minimal complications. 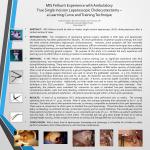