Minimally Invasive Trends in Common General Surgery Procedures from 2007-2013: An Analysis of the National Inpatient Sample

Methods: A retrospective analysis of the 2007-2013 Nationwide Inpatient Sample (NIS) Healthcare Cost and Utilization Project (HCUP) database was performed. Patients who had appendectomy (excluding incidental appendectomy), cholecystectomy, colectomy, rectal resection, inguinal/femoral hernia repair, and ventral hernia repair were included. Patients were selected based on Diagnosis-Related Group (DRG) codes and ICD-9 codes for the primary procedure performed during each admission. Other laparoscopic procedures could not be identified based on available codes. 81,112 patients (6.9%) less than 16 years of age were excluded. Trends for each type of procedure were evaluated during the study period. The Chi-Square test (Mantel-Haenszel extension) was used for trend analysis. 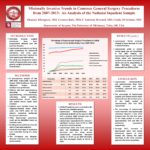