Background:
A radical approach to lymphadenectomy has been shown to improve survival in squamous cell carcinoma (SCC) of esophagus in some series. Critics have questioned such radical procedure mentioning that the benefit is offset by increased post-operative morbidity and mortality. Minimally invasive esophagectomy (MIE) has been shown to have lesser morbidity. The question of increasing the radicality of MIE without increasing morbidity is still being answered. We analyzed our results to show that a standardized radical right thoracoscopic approach in prone position can achieve high lymph node yield without increase in morbidity and mortality.

Results:
48 patients of middle and lower third SCC of esophagus underwent MIE in last two years. The average total lymph nodes and mediastinal lymph nodes harvested was 38(28-46) and 20(15-28) respectively which was significantly higher than that in pre-standardization period (mean total- 19, mediastinal-12). There was no mortality and no significant increase in morbidity. 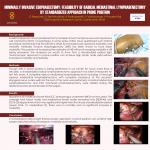