Introduction: Minimally invasive colorectal resection (MICR) in cancer patients is associated with persistently increased plasma levels of the following proangiogenic proteins: VEGF, Angiopoetin-2, Placental growth factor, and sVCAM. Prior studies have shown that plasma from the 2nd and 3rd weeks after MICR and open colorectal resection for cancer stimulates in vitro endothelial cell (EC) proliferation, migration, and invasion which are critical for new blood vessel formation. The purpose of this study is to investigate the impact of postoperative (PostOp) plasma from patients undergoing MICR for benign indications on EC proliferation (branch point formation [BP]), migration (MIG), and invasion (INV). The overall goal is to determine if the proangiogenic effects noted after MICR for cancer also occur in the benign disease setting.

Method: Patients in an IRB approved data/plasma bank who underwent elective MICR for benign colorectal problems for whom adequate plasma samples were available were included. Blood samples were collected Preoperatively (PreOp) and at a variety of Postop time points. Plasma was isolated and stored at -80°C. Only patients for whom a PreOp and at least one Postop sample between POD 7-33 were available were included. Late samples were bundled into 7-14 day blocks and considered as single time points. In-vitro human umbilical venous endothelial cell (HUVEC) cultures were used for BP, INV and MIG assays; the time points assessed were PreOp, POD7-13, POD14-20 and POD21-33 (n=30 for each postop time point). Data were analyzed by paired t-test and reposted as mean and ± SD for each parameter at each time point (significance p<0.05).

Conclusion: Postop plasma from the 2nd and 3rd but not the 4th/5th weeks after MICR for benign pathology significantly stimulates in-vitro EC proliferation, invasion and migration which are critical to angiogenesis. These results are similar to those noted with plasma from cancer patients who had MICR and Open resection. This study confirms that surgery induced proangiogenic plasma alterations are procedure related and not dependent on the surgical indication. Further studies are underway to determine which specific proteins are responsible for these effects in the benign population. 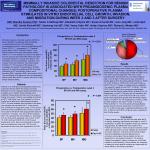