Introduction: Laparoscopic repair ias has become an important tool in the treatment of groin hernias, with its proven advantages in terms of faster recovery, faster return to work and less chronic groin pain. Traditionally, in both the totally extra-peritoneal (TEP) approach and the transabdominal pre-peritoneal approach (TAPP), the mesh is fixed to Cooper’s ligament and the lower abdominal musculature using disposable tackers, which add a significant cost increment to the surgery. We present a case series of laparoscopic TEP hernioplasties in which the mesh was fixed using a highly cost-effective device based on n-butly cyanoacrylate (NBCA) glue.

Methods: Patients undergoing laparscopic TEP hernioplasty between January 2009 and January 2015 were included in this series. After standard dissection using three ports, extraperitoneal space was created, sac dissected and reduced and mesh deployed. Thereafter, a 20 G disposable lumbar puncture spinal needle was introduced about 2-3 cms above the pubic symphysis, directed caudally. The mesh was fixed by spraying 0.5 ml of medical grade NBCA glue per mesh, over the pubic symphysis and Cooper’s ligament, holding the mesh in position. Pressure was maintained on the mesh for about one and a half to two minutes, followed by controlled deflation.

Conclusion: NBCA glue fixation of the mesh is a effective option for laparoscopic TEP hernioplasty, providing advantage of reduced costs. 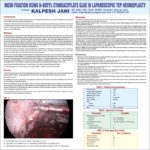