Objective: Intra-thoracic anastomotic leak is a known complication of esophageal resection and carries a significant morbidity and mortality. The aim of this study is to review the management and outcomes of anastomotic leak after esophagectomy at our institution.

Methods: After institutional review board approval, a prospectively maintained database was retrospectively reviewed to identify patients who underwent esophagectomy from 7/2003 to 8/2013. Patients who had an anastomotic leak after intra-thoracic anastomosis were identified and formed the study cohort. Data regarding their diagnosis, management and outcomes was collected. Leaks were defined as early or late based on their diagnosis on or before postoperative day seven.

Conclusion: The majority of intra-thoracic anastomotic leaks can be successfully managed without reoperation. Excluding the leak endoscopically (via stenting, glue, vacuum sponge) and draining fluid collections is the cornerstone of treatment. Surgery should be reserved for those with clinical deterioration despite non-operative modalities. The incidence of intra-thoracic leaks following thoracoscopy deserves further investigation. 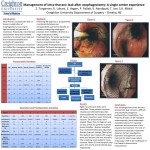