The association between inflammatory bowel disease and adenocarcinoma has been well established. Although rare, carcinoid tumors have also been described in association with Crohn’s disease. Most commonly carcinoid tumors have been described in areas of the gastrointestinal tract uninvolved by active Crohn’s disease. We present a case of carcinoid tumor diagnosed within a segment of small bowel with active Crohn’s ileitis. To our knowledge less then 10 cases have been reported in the literature

A 41-year old female with a 7-year history of chronic post-prandial right lower quadrant pain and diarrhea presented with worsening abdominal pain and weight loss. Laboratory studies were remarkable for a microcytic anemia with a hemoglobin of 9, an elevated C-reactive protein level of 14.5, and an albumin level of 1.5. The patient’s white blood cell count and electrolytes were within normal limits.

A CT scan of the abdomen and pelvis showed circumferential thickening of the distal and terminal ileum with an adjacent 6.8 x 4.7 x 7.8 cm poorly marginated lobular mesenteric mass within the left upper pelvis overlying the left external iliac vessels. Enlargement of numerous mesenteric lymph nodes were also noted. These radiologic findings raised the concern not only for the presence of inflammatory bowel disease but also a likely separate malignancy such as a carcinoid tumor or lymphoma. A colonoscopy was completed with no colonic pathology identified. The terminal ileum could not be cannulated for biopsy secondary to inflammation.

A diagnostic laparoscopy was performed. Inflammation was noted in the distal and terminal ileum with evidence of creeping fat consistent with the suspicion for Crohn’s disease. Initially, we were unable to completely run the small bowel from the ligament of treitz distally due to the extensive inflammation within the distal ileum and presence of interloop adhesions along with adhesions of these loops to the sigmoid colon. We were able to gently free up most of these adhesions laparoscopically, with the exception of one loop which was adherent to the sacral promontory. There was no involvement of the left external iliac vessels. One of our port sites was then converted to a mini-laparotomy incision to palpate and evaluate the remaining loop of adherent small bowel. This loop was able to be freed using blunt finger dissection. No discrete mass could be palpated, although there were multiple enlarged lymph nodes identified in the mesentery. The involved segment of bowel was resected. An end ileostomy was created.

The involved segment of ileum, cecum and appendix were submitted for pathology. Final pathology showed evidence of Crohn’s ileitis with a 0.6 cm carcinoid tumor invading into the submucosa of the terminal ileum. No areas of lympho-vascular or perineural invasion were identified. Twenty lymph nodes were negative for metastasis. The mitotic rate was one per 10 high power fields. TMN staging was consistent with a T1, N0, M0 lesion.

The patient was placed on 5-ASA and corticosteroids postoperatively. Her nutritional status improved and her ileostomy has since been reversed without complication. 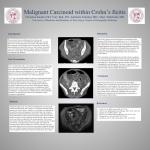