Introduction: Malignant histology and endoscopic resection failure of neoplastic colonic polyps are indications for surgical colonic resection. The prevalence of lymph node metastases, postoperative recurrence and rate of complications of the surgical procedure are not clearly established.

Aim: To determine the prevalence of lymph node metastases and postoperative recurrence after laparoscopic resection of neoplastic colonic polyp, and to evaluate the mobidity of the surgical procedure.

Material and Methods: From June 2003 to February 2011, patients undergoing laparoscopic resection for colonic polyp with in situ or invasive carcinoma were prospectively included. Demographic data, endoscopic features of the colonic polyps (morphology using Paris classification, size and location) and histology were consigned. All patients underwent colonoscopic surveillance. Carcinoembriogenic antigen (CEA), abdominal ultrasonography or CT-scan were performed during the follow-up according to the tumor staging. The primary outcome measured was the presence of lymph node metastases in the surgical specimen and postoperative local or distant recurrence. Secondary outcome was the procedure morbidity and mortality rates. Univariate and multivariate logistic regression tests were performed to search for independent predictors of lymph node metastases and postoperative recurrence.

Results: A total of 88 patients underwent a laparoscopic colonic resection due to colonic polyps during this period. 66% of the patients had at least one year of follow-up.51% were male and the mean age was 65 years old (40-95). Polyps average size was 22mm(range 5-60mm) and the most frequent morphology was: 0-I s(sessile)38%, 0-IIa(flat-elevated)30% and 0-Ip(pedunculated)24%. 82% of the polyps presented in situ carcinoma and 18% adenocarcinoma. Depth of invasion of the adenocarcinomas was: sm3 47%, sm1 30% and sm2 20%. Only 20% had poor histological differentiation and 6% lymph vascular invasion. Endoscopic resection with curative intention was performed in 50% of patients of whom only 9% presented complete endoscopic resection (all of them with submucosal invasion). Postoperative average length of stay was 4,9 days. Postoperative morbidity rate was 17% with only 6% of patients requiring a reoperation. Mortality rate was 1.1%. Prevalence of lymph node metastasis was 0% in patients with in situ carcinoma and 7% in those with adenocarcinoma. Only one patient (7%) with adenocarcinoma (T1 (sm3) N0) presented local recurrence after surgical resection and none of them distant metastases. We didn’t find any independent predictor of lymph node metastases or local recurrence. 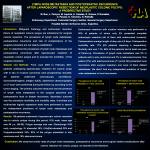