Lower Levels of Occasional Blood Glucose in Patients with Billroth I Reconstruction After Not Vagus Nerve-spared Laparoscoy-Assisted Distal Gastrectomy. 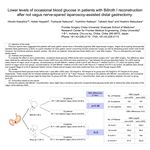