Methods: A prospective database of consecutive single-incision laparoscopic colectomies performed by two surgeons at a single institution was retrospectively reviewed. Straight laparoscopic instruments and a 5-mm, 30-degree laparoscope were introduced through a SILS™ port (Covidien, New Haven, CT) after a 3 cm fascial incision and a 2.5 cm skin incision were made. Specimens were removed through the single incision using an Alexis® wound protector (Applied Medical, Rancho Santa Margarita, CA). The fascia was closed with interrupted figure-eight 0-vicryl suture. Patients were discharged from hospital after tolerating oral diet and resumption of bowel function, and seen in follow-up 2 weeks after surgery. 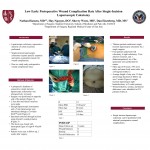