Backgroud Gastric cancer (GC) is the second leading cause of cancer-related death wordwide. AFAP1-AS1, a long noncoding RNA (lncRNA), is believed to promote an aggressive progress in cancer, but its role in gastric cancer remains largely unkonwn.

Method The expression of AFAP1-AS1 in GC tissues and cell lines was measured via quantitative reverse-transcriptase polymerase chain reaction (qRT-PCR). The knock-down of AFAP1-AS1 was performed using a lentivirus vector. The proliferation of GC cells was measured by using CCK8 reagent. The migration and invasion of GC cells were analyzed via trans-well assays, respectively. The cut-off value of the expression of AFAP1-AS1 was evaluated by using receiver operating characteristics curve (ROC), and Kaplan-Meier was used to analyze the patients’ survial.

Results We found that the expression of AFAP1-AS1 was significantly increased in the primary tumor tissues of GC patients with lymphnode metastasis or tumor node metastasis (TNM) stage (III or IV). The analysis of ROC curve revealed that the expression of AFAP-AS1 with the cut-off value of 0.5040 could distinguished the GC tissues from the matched normal tissues, with the AUC of 0.8802, sensitivity of 81.25% and the specificity of 83.75%. The overexpression of AFAP1-AS1 was positively correlated with the poor survival rates of GC patients. Furthermore, the down-regulation of AFAP1-AS1 significantly inhibited proliferation, migration and invasion of GC cells in vitro.

Conclusion Our study demonstrated that the expression signature of AFAP1-AS1 may serve as a biomarker for the diagnosis and prognosis of GC, and its overexpression can promote the aggressive progression of GC. 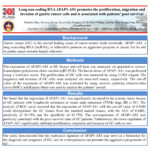