Local Operated Detachable End-effector Manipulator (LODEM) that can support endoscopic surgery with functional preservation when operated by doctors working near a patient was developed. We proposed a third arm that collaborated and co-existed with a surgeon in clean area. It was based on a manipulator with detachable commercial forceps for handling internal organs operated by a surgeon locally and intuitively. The manipulator that had five degrees of freedom was composed of a tool positioning arm and a detachable forceps wire-driven mechanics. The manipulator attached to a commercial forceps was operated by a surgeon’s hand or foot. The tip of the forceps, working through a restrained pivot point, was controlled to move in a horizontal and an inserting direction. We made a prototype, and its dynamic characteristics were experimentally measured. LODEM was applied in experiments on a task model for operability and a dog in vivo for expanding field of view by specialists. It was confirmed that its operational, holding and tractive functions were good enough for practical use. The results of these experiments were being applied so that LODEM can be further improved for clinical use. It is concluded that this newly developed LODEM will be a great help in further developing robot assisted solo surgery. 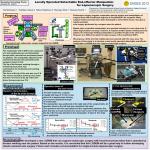