Limited Resection for Early Adenocarcinoma of the Esophago-gastric Junction 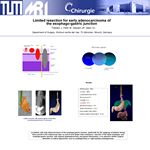