Limitations of the One Step Laparoscopic Cholecystectomy

Introduction: The first One-Step procedure (laparoscopic cholecystectomy, intraoperative cholangiogram (IOC), and if indicated, intraoperative endoscopic retrograde cholangiopancreatography (ERCP)) was performed at University Medical Center, Las Vegas, NV in 1997 by Nathan Ozobia, MD. The experience was presented at the 6th World Congress of Endoscopic Surgery in Rome, Italy in 1998. In 2010, two surgery residents at UNSOM began training in diagnostic and therapeutic ERCP and a formal One-Step program was initiated, leading to numerous institutional review board studies and new innovative techniques of treating obstructive complications of biliary disease.

Materials & Methods: A retrospective analysis (1997-2011) was completed and a prospective analysis is underway regarding utilization of the One-Step procedure. Over 120 cases have been reviewed thus far and the difficulties and limitations encountered include:

Results: The experience gained in the One-Step procedure has led to numerous changes in our practice. ERCPs are always done after the cholecystectomy to avert the impaired visibility caused by gaseous distension of the duodenum, stomach, and hepatic flexure that occurs after ERCP. We no longer take exhaustive measures to clear the CBD in cases of innumerable and large stones. Instead, we use stents liberally and return to the OR days or weeks later, which has kept our operating room times, complications, and radiation exposure at acceptable levels. Also, meticulous attention to technique during IOCs and ERCPs can avoid unnecessary ERCPs and papillotomies, respectively.

Conclusion: The One-Step procedure is an evolving concept and larger volumes are needed to establish its place in general surgery. As more surgical endoscopists utilize this procedure, training can be made available to residents if approved by the surgical board. 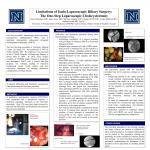