Background Single incision laparoscopic cholecystectomy (SILC) has been projected to be a feasible and equally efficient technique compared with conventional laparoscopic cholecystectomy (CLC). However, little is known about the issues associated with the learning curve of this technique, which includes operating time and safety in hands of surgeons with little experience of SILC.

Method The study reviewed a series of 438 laparoscopic cholecystectomies attempted in the single incision technique from 2011 to 2012 at Shengjing Hospital of China Medical University. All the procedures were performed using the standard trocars and rigid laparoscopic instruments by four laparoscopic surgeons with little experience of SILC. Patient characteristics (gender, age, and indication), intraoperative outcomes (operating time, conversions, and estimated blood loss) and postoperative outcomes (complications within the first month of surgery, days to oral food intake) were recorded and analyzed.

Results 424 (96.8%) cases with an overall average age 49.3±13.2 years were accomplished successfully in the single incision technique. The overall average operating time (from skin to skin) was 57.3±19.3min. Complications were observed in 4 (0.9%) cases: hepatic bile duct injury (n=1), bleeding from the liver bed (n=1), and surgical site hematoma (n=2). Outcomes of patients operated by a single surgeon were compared, and no statistically differences were noted in terms of operating time (p=0.105), conversion rate (p=0.392) and complications (p=0.392). In particular, the data of all surgeons showed significant decreases in operating time after approximately 12-15 cases.

Conclusion SILC can be implemented safely in teaching hospitals, and it has a short learning curve for laparoscopic surgeons who are proficient in CLC but less experienced in SILC. SILC procedure may be offered as an alternative for cholecystectomy in carefully selected patients. 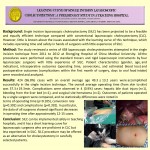