INTRODUCTION: Laparoscopic SG (LSG) is gaining popularity as a definite, isolated bariatric procedure for morbid obesity due to satisfactory weight loss and resolution of co-morbidities. This study examines factors affecting leak rates after LSG in the largest longitudinal bariatric database in the world, the Bariatric Outcomes Longitudinal Database (BOLD).

CONCLUSION: SG is an increasingly performed bariatric procedure with significant weight loss at 1 year follow up and low mortality and morbidity. In this large series of 3,448 cases, leak rate after LSG was 0.8%. Significantly higher leak rates were found in heavier patients with lower ASA score. Factors which could have lead to higher leak rates in lower ASA score patients will be discussed in the presentation with a view to improve outcomes and decrease further leaks. 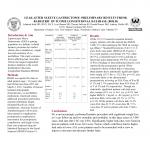