Background: Laparoscopic Paraesophageal hernia (PEH) repair is considered the standard approach. Over the course of the last decade, robotic PEH repair has been an emerging and innovative approach, providing the surgeon with 3D visualization and articulation of instruments for better dissection of the hiatus.

Materials and Methods: A retrospective review of all the PEH repair cases performed in our center during the course of the past 10 years was performed. A total of 342 patients were reviewed, Demographic data, comorbidities, preoperative symptoms, operative details (type of hernia, operative time, American Society of Anesthesiology (ASA) classification, perioperative complications) and outcomes (length of stay, number of recurrence, post operative symptoms and follow up) were collected for analysis. Student's t-test, Pearson’s chi-square test, Fisher’s exact test, and the Mann-Whitney test were used for comparisons between robotic and laparoscopic study groups. P-values less than 0.05 were considered statistically significant. All analyses were carried out using R statistical software

Conclusion: Although all other outcomes were comparable, this study demonstrates the robotic approach to primary PEH repair is associated with a considerably shorter length of hospital stay compared to standard laparoscopy. There appears to be no advantage to robotic repair of recurrent PEH over that of standard laparoscopy. 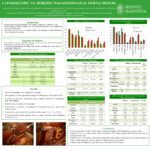