In follow up, in four paitents with idiopathic trombocytopenic purpura thrombocyte levels didn’t increase. In one patient from those patients accessory spleen was detected and resected with second operation.. 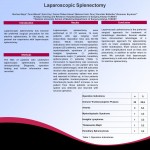