Introduction: A new technique for laparoscopic right hemicolectomy (LRH) was adopted at our pediatric institution that utilized an intuitively-controlled articulating device. This facilitated an intracorporeal anastomosis with a Pfannenstiel extraction site with the proposed advantage of a rapid return of bowel function and minimal cosmetic impact. We describe our technique and early intraoperative and short-term outcomes.

Methods and Procedures: A retrospective review was carried out of all patients who have undergone a LRH at our institution from January 2017 to September 2018.  All cases were carried out with the described surgical technique. 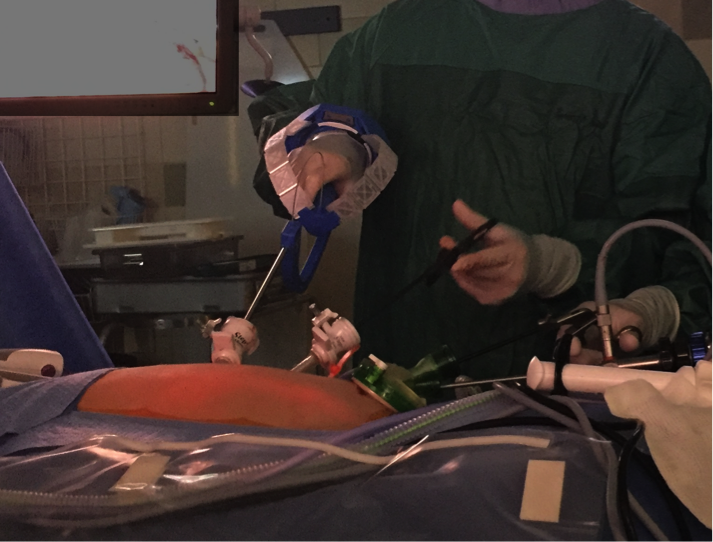 A Pfannenstiel incision with an advanced access platform and two to three additional ports were utilized. Medial-to-lateral dissection was carried out in a standard fashion and the side-to-side anastomosis was created intracorporeally with endostaplers. The common enterotomy was sewn using a novel intuitively-controlled articulating instrument. The specimen was extracted from the Pfannenstiel incision.

Results: A total of five laparoscopic right hemicolectomies have been completed with this technique since January 2017. The median age [IQR] was 14 years [11-16], median BMI 17.5 [17.3-21.2], and 2/5 patients were female (40%). Four patients had an appendiceal neuroendocrine tumour and one had a mucinous neoplasm of the appendix; all were referred after incidental findings post-laparoscopic appendectomy and were discussed pre- and post-operatively at our institutional multi-disciplinary tumour board. All cases were completed with a Pfannenstiel incision for extraction with an intracorporeal anastomosis utilizing this novel tool; no case required conversion to open.  A median of 2 [2-3] additional ports were used. Median operating time was 180 minutes [169-221].  All cases were carried out by fellows who had each performed fewer than five cases with this new tool. No patients had residual tumour in the specimen, 3 patients (60%) had one positive lymph node (LN) and a median of 39 [17-45] LNs were retrieved. The median length of stay was 3 days [3-6]. There were no major complications to date with a median length of follow-up 291 days [271-403].

Conclusions: The use of a novel articulating instrument facilitates the intracorporeal anastomosis and thus the use of a Pfannenstiel extraction rather than a larger umbilical incision.  In early experience, this combination leads to a short hospital stay and improved cosmesis.