Introduction: Procedures to restore bowel continuity following a prior emergent Hartmann’s procedure are associated with high morbidity and failure rates. It is estimated that around 20-50% of patients never progress to a restorative procedure. There are few studies that evaluate the feasibility and safety of approaching these complex cases using a minimally invasive platform. We present a single center series evaluating laparoscopic-assisted reversal following an open emergent Hartmann's procedure.

Results: 40 patients were evaluated. The majority were performed using LAP technique n=25 (62.5%). The mean age, ASA, and BMI were 58.2, 2, and 27.9, respectively. Nearly half were female (n=18, 45%). The mean operative time and EBL were 207 minutes and 103 mL respectively. In all cases reversal with establishment of bowel continuity was successful, however, 9 patients underwent diverting loop ileostomy to protect the anastomosis. Eight cases (20%) required conversion to open surgery chiefly due to inability to safely expose and mobilize the rectal stump. In all converted cases, the majority of the procedure had already been accomplished using laparoscopic techniques and there were no significant differences in all outcome measures when compared to the non-converted cases. The mean LOS was 4.1 days (range 2-18). There were a total of 5 postoperative complications (12.5%) including 2 deep surgical site infections one of which required readmission. There were no anastomotic leaks.

Conclusion: Reversal of Hartmann’s stump following a prior open and emergent procedure can be successfully achieved using a minimally invasive surgical platform. The outcomes result in a higher success rate and lower rates of complications compared to historical data. The benefits of minimally invasive surgery should be considered as a feasible option when planning the surgical approach for these complex cases. 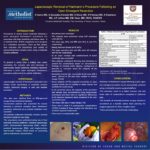