Laparoscopic Resection of the Left Liver: Technical Refinements for Standardization

[Background]
Laparoscopic left lateral segmentectomy (Lap-LLS) is good indication of laparoscopic liver surgery that is possible to be standardized as a safety and feasible procedure. In addition to the procedure of Lap-LLS, basic techniques such as encircling of left Glissonean pedicle at hepatic hilum and middle+left hepatic vein (MLHV) facilitate laparoscopic left hepatic lobectomy (Lap-LL) easily. In this study, we show the techniques in our Lap-LLS and –LL.
[Patients and Methods]
Fourteen successive patients underwent Lap-LLS (n=10) or –LL (n=4) from 2004 to 2009. Surgical indications were follows; primary liver cancer: 7, metastatic liver tumor: 3, lymphoma: 1, others: 3.
Procedures of Lap-LLS; i) left liver mobilization including division of round, falciform and coronary ligament using vessel sealing system (VSS), ii) taping behind liver for liver hanging maneuver, iii) encircling of hepatoduodenal ligament using cholangioscope for Pringle method, iv) preceding of small incision for avoiding gas emboli during parenchymal transection, v) division of Glissonean pedicle and hepatic vein by endostapler (or VSS)
Procedures of Lap-LL; in addition to above procedures, vi) control of left Glissonean pedicle at hepatic hilum and MLHV.
Comparison of surgical outcome between laparoscopic and open left hepatic lobectomy; open group: 14 patients underwent open surgery during the same period were included.
[Results]
Mean operative time was 238 minutes and intraoperative blood loss was 140 g in laparoscopic left hepatectomy. Postoperative hospital stay was 15 days. There was no postoperative complication. Compared with the open group, operative time was shorter (234 vs. 341, p=0.03) and blood loss was less in the laparoscopic group (82 vs. 314, p = 0.01).
[Conclusion]
Lap-LL and –LLS are safe and feasible procedures by basic techniques in open hepatectomy and useful devices, and can be standard procedures for selected patients. 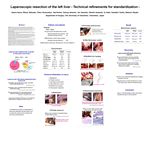