Objective of Study:  A case report was designed to demonstrate the effective resection of a large, complex, infected hepatic cyst with insidious presentation in a medically fragile 78-year-old female.  Laboratory values, computed tomography images and intraoperative photographs are used to demonstrate the case and surgical techniques use to successfully treat the patient.

Methods and Procedures:  A 78-year-old female presented to the emergency department complaining of epigastric pain for twenty-four hours accompanied by fevers, chills and rigors.  She was found to be septic secondary to a 13.8 x 12.6 x 12.9cm complex collection in the left lobe of the liver.  Percutaneous drainage by interventional radiology was avoided due to concerns for hydatid cyst.  After adequate resuscitation and broad-spectrum antibiotic coverage, the patient was taken to the operating room.  Diagnostic laparoscopy was performed using one 12mm and two 5mm trocars.  Brown-colored purulent fluid was found in all quadrants of the abdomen and cultures were taken.  Enseal energy device was used to take down the falciform ligament and the omental adhesions covering of the left lobe of the liver.  At this time the liver cyst was perforated and a copious collection of brown fluid was encountered and suctioned.  The Enseal was used to perform a hepatotomy into the abscess cavity and the area was washed out copiously.  The free wall of the cyst was resected with Enseal leaving the remaining portion marsupialized to the omentum[Images included depicting the large complex cyst extending from the left lobe of the liver].  Argon beam coagulation was applied to the left lobe of the liver until hemostasis was obtained [Multiple Images depicting resection, cyst, hemostatis].  The abdomen was again washed copiously and two 19 French Blake drains were placed; one was directed into the cyst cavity with the second in Morrison’s pouch.  The 12mm trocar site was closed in two layers.  The patient recovered well with steadily improving white blood cell counts, liver function tests.  Drain quality and quantity improved and drains were removed one at a time.  Pathology was negative for malignancy and cultures grew multiple enteric organisms.  The patient was discharged home after completing an antibiotic course.

Conslusions:  Large hepatic resections are traditionally relegated to open operations.  New techniques and devices have made laparoscopic resection of hepatic an effective and safe procedure for patients who have no contraindications. 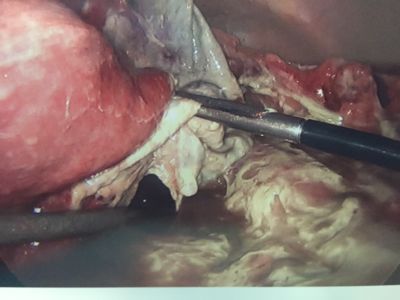