Laparoscopic Partial Splenectomy in A Case Of A Congenital Epidermoid Cyst

INTRODUCTION: Splenic congenital epidermoid cysts are rarely seen and 3% of all splenic cysts. Despite not constituting a problem if they are small in size, they might become symptomatic with pain because of bleefing inside the cyst, rupture or inflection. Larger cysts may cause nausea, vomiting, left arm pain and respiratory distress by compression in addition to the aforementioned symptoms. Surgery is recommended in symptomatic cases or cysts larger than 5 cm. Early and late complications of splenectomy can result in serious morbidity and mortality. The best way to avoid post-splenectomy sepsis, which has a very high mortality rate and can be seen in spite of vaccination for encapsulated bacteria is partial splenectomy. We aimed to present our case of splenic congenital epidermoid cyst in which we performed laparoscopic partial splenectomy.

PRESENTATION OF CASE: A male patient at the age of 20 presented with the symptoms of nausea and abdominal pain that had occurred intermittently for the past few months. He did not have a remarkable medical history. Medical imaging of the abdomen was ordered after finding dullness in Traube’s space during his physical examination. In the abdominal CT scan with contrast, a cystic mass lesion with the radius of 11 cm that was located in the upper pole of the spleen and consistent with epidermoid cyst. A partial splenectomy was decided on after examining the CT images carefully. The patient got vaccinated for encapsulated bacteria before the splenectomy. Laparoscopic exploration was followed by the entry with standard ports. The upper pole branch of the splenic artery was dissected, clipped and cut. Subsequently to the formation of ischemic demarcation line, partial splenectomy was completed with using bipolar vessel sealing device. Leaking blood despite demarcation was halted by Argon plasma coagulation. The operation ended after applying some biological hemostatic agents on the incision surface. The patient was discharged from hospital on the postoperative 3rd day without any complications. 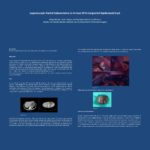