Bronchopleural fistula represents one of the most serious complications after pneumonectomy with an incidence of 1% to 12%. Viable tissue reinforcement, which are pleura, intercostals muscle, pericardium, omentum etc., reduces this complication. Among these tissues pedicled omental flaps have been widely used because of better results due to abundance of viable tissue and excellent vascularization. To reduce operation stress we performed laparoscopic omentoplasty.

Case: A 75-year-old man complaining of dyspnea was diagnosed squamous cell carcinoma of right lung. He had respiratory function problem, therefore he was received 70 Gy of radiotherapy and chemotherapy. However, the tumor did not decrease, in addition, cough and purulent sputum became severe gradually. We performed right pneumonectomy and laparoscopic omentoplasty to prevent bronchial fistula, he had no pulmonary complication. Laparoscopic procedure took 90 min. for harvesting omental flap with four 5mm ports and camera port. Radiotherapy is a risk factor for postoperative bronchial fistula, omentopexy was useful to prevent it.

Summary: This laparoscopic technique of omental flap transposition for bronchial stump coverage is an effective and less invasive method for the prevention of postpneumonectomy bronchopleural fistula. This procedure can be performed safely avoiding an invasive open laparotomy. 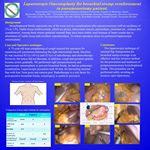