Colonic volvulus is defined as an axial twist of the colon along its mesentery, it accounts for 2-4% of large bowel obstruction. The most common site for volvulus is the sigmoid colon followed by the caecum, splenic flexure is the least common site with only 1-3% of cases. Splenic flexure is ligament-fixated to the abdominal wall in most individuals, congenital absence or acquired laxity of these ligaments predispose for torsion. Reports have been published in all age groups.

Clinical presentation vary from insidious abdominal distention with obstipation to acute abdominal pain and guarding due to vascular compromise. Suspicion is raised on the plain radiograph where a markedly dilated air-filled colon is visualized in the left upper quadrant. Abdominal CT-scan is the study of choice to define the level, degree of volvulus as well as vascular compromise.

We present a case of uncomplicated splenic flexure volvulus that was initially managed by laparoscopic detorsion and posteriorly with left hemi-colectomy.

A 25 year-old otherwise healthy male presented to the emergency department with a five-day history of nausea, dull abdominal pain on his left flank and bloating. He had a history of chronic constipation and recurrent abdominal colic. Past medical history was unremarkable.

On examination, his abdomen was distended and mildly tender to palpation without any signs of peritoneal irritation. Laboratory tests were within normal parameters. A plain abdominal radiograph showed markedly dilation of the transverse and descending colon with the presence of fluid levels and absence of air in the distal colon and rectum. An abdominal CT-scan demonstrated a grossly dilated bowel with a transition zone distal to the splenic flexure with associated collapse of the distal GI tract.

A nasogastric tube was placed and the patient was scheduled for a diagnostic laparoscopy the same day of addition. A 10 mm trocar was inserted thought the umbilicus two additional 5 mm trocars were placed on the left lower abdominal region. A markedly dilated transverse colon and a 180° splenic flexure volvulus was observed; also the absence of splenocolic and phrenocolic ligaments was noted. Because no signs of isquemia, gangrene, perforation or intraperitoneal contamination were found, conservative treatment was considered feasible. Derotation was achieved by means of traction and the patient was left for observation.

Due to the absence of clinical and radiological resolution after 72 hours, a laparoscopic left hemi-colectomy was planned. A trans-operative colonoscopy was performed for endoscopic decompression. Vascular control was achieved with bipolar energy, the specimen was removed thought a mini-pfannestiel incision and an end-to-end colo-rectal anastomosis with a circular stapler was created. He had an uneventful postoperative recovery.

Splenic flexure volvulus is a rare disease with less than 25 cases reported in the English literature. Although endoscopic decompression can be performed in the hemodynamically stable patient, surgical resection is the primary definitive treatment. To our knowledge this is the first reported case of a patient managed with minimally invasive techniques. 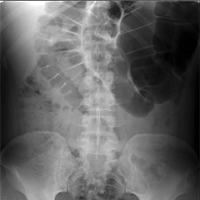 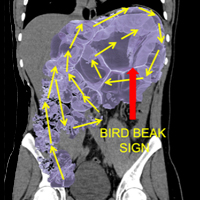 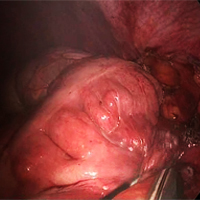