Laparoscopic Management of Appendiceal Mucoceles: Outcomes in a Series of 15 Cases

INTRODUCTION: The aim of this paper is to evaluate the safety and efficacy of managing appendiceal mucoceles laparoscopically. Mucocele of the appendix is an extremely rare condition (<0.5%) that requires surgical excision due to the malignant potential of the lesion. Improper removal of the lesion that leads to rupture and spillage of the mucin can result in pseudomyxoma peritonei, which turns a relatively simple surgical problem into a very complex problem that is often incurable. Many surgeons advocate the open approach for management of appendiceal mucoceles to mitigate the risk of mucin spillage. Several case reports, however, have described successful laparoscopic care. This paper adds to the limited literature, as it describes outcomes following laparoscopic management of appendiceal mucocele in 15 patients.

METHODS AND PROCEDURES: A prospective database was used to identify all patients with suspected appendiceal mucocele who underwent a laparoscopic appendectomy between January, 2006 and October, 2015. Additional data was retrospectively collected and included patient characteristics, lesion characteristics, diagnostic method, intraoperative data, final pathology, and follow-up. The primary endpoint was complications. Data was maintained in an excel database and a descriptive analysis performed.

RESULTS: During our study period, 15 patients underwent laparoscopic appendectomy for suspected appendiceal mucocele. The majority of patients were female (60%) and Caucasian (66.7%), with a mean age of 57.7 ± 16.3 years. Twelve of the 15 lesions were identified preoperatively with CT; the remaining 3 were diagnosed intraoperatively. Mean lesion size from preoperative imaging (2.3 ± 2.2 cm) was similar to the size of the resected lesions on pathologic review (2.1 ± 1.8 cm). Mean estimated blood loss was 10 ± 0 cc. Regarding final pathology, only 1 specimen showed evidence of early appendicitis, and a variety of pathologies were reported, including simple mucocele (n=5), mucinous cystadenoma (n=3), mucinous cystadenoma with low grade dysplasia (n=6), and mucinous cystic neoplasm with high grade dysplasia (n=1). Only 1 lesion had evidence of a positive margin and 5 had evidence of dissecting mucin. There were no ruptures and no intra- or postoperative complications, symptoms of recurrence, or radiographic evidence of recurrence or pseudomyxoma peritonei. Mean follow-up was 3.5 ± 2.8 years.

CONCLUSIONS: In conclusion, this series provides further support that laparoscopic management of appendiceal mucoceles is a safe and effective alternative to open surgery. 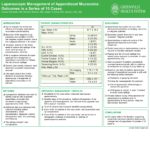