Adjustable gastric band colocation is a procedure that has had an exponential growth. In the last years it has grown in a 329%, being the second most common bariatric surgery. However, this has also brought an increased in its complications.
We report the case of a 41-year-old woman with history of laparoscopic gastric banding 9 years before. She presented to our hospital with abdominal pain. She stated that she woke up with no symptoms 48 hours before, and as the morning progressed she suddenly started to develop epigastric pain. She denied prior episodes of similar pain. She reported a 38 degree Celsius fever. Abdominal pain had been continuous in nature and on arrival was 9/10.

Laboratory investigations included an abnormal complete blood count that reported neutrophilic leukocytosis of 20.3 x 109/L. Due to inconclusive physical exam and the concerning leukocyte level and associated fever, she was sent for a computed tomography scan for further evaluation of abdominal pain. The findings were reported as slipped gastric band located in the proximal stomach in close proximity to the hiatus; density changes in fat adjacent to gastric band, and lymphatic nodes of inflammatory aspect. Superior endoscopy was done, without any significant findings.

The patient was taken to the operating room for a diagnostic laparoscopy with a preoperative diagnosis of abdominal infection. Intra-abdominal exploration revealed a slipped gastric band and an associated abscess on the lesser curvature. The gastric band was removed without complications, and the abscess was drained. The patient had a favorable evolution and was discharged at 5th postoperative day after a normal hidrosoluble swallow.

Band slip is one of the most common complications of gastric banding. It occurs in 24% of patients, causing a cephalad herniation of the stomach. The occurrence of infection is a serious complication of gastric slip, almost always associated to gastric wall erosion. Incidence of erosion is of 0.2 to 2%, most of the time being microscopic in nature. The management of abdominal abscess associated to gastric band slip can be laparoscopic without added complications. 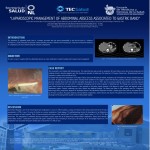