Introduction: The aim of this study was to evaluate the feasibility of laparoscopic limited gastrectomy with sentinel basin(SB) dissection for gastric cancer in phase II clinical setting.
Methods: Forty-five patients were enrolled who had been diagnosed with cT1–T2a and cN0 stage gastric cancers < 4cm from July 2010 to August 2011. After detection of SBs using endoscopic ICG and 99mTc-ASC injection during operation, SB dissection was laparoscopically performed. When the sentinel node(SN) biopsy by frozen section (hematoxylin and eosin staining and immunohistochemistry for cytokeratin.) was negative, limited gastrectomy was performed.
Results: We failed to complete this procedure in two patients because of intraperitoneal leakage of dye and isotope and obesity. SNs were identified in 42 of the 43 patients (97.67 %; mean 5.5 per patient). Ten patients (23.26%) with positive SN biopsy underwent laparoscopic assisted distal gastrectomy with D2 lymph node dissection, 33 with negative SN biopsy underwent limited gastrectomy with SB dissection; endoscopic resection in 10, wedge resection in 7 and segmental gastrectomy in 16. Mean operation time was 192.6 min for patients with negative SN biopsy and 267.0 min for those with positive SN biospsy. Complications were occurred in 4 patients (9.3%). Postoperative morbidity included one gastric stasis, one ulcer bleeding and one minor perforation after endoscopic resection and one postoperative bleeding.
Conclusion: Limited gastrectomy with SB dissection for gastric cancer was considered safe and acceptable although long-term follow-up is mandatory. 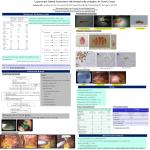