Objective:
Gastroparesis is a motility disorder of the stomach characterized by delayed passage of liquid and/or food boluses without a widely accepted effective treatment thus far.  Our aim is to evaluate the effectiveness of an implantable gastric electrical stimulator device (Enterra®; Medtronic; Minneapolis, MN) in patients with diabetic or idiopathic gastroparesis as measured by patient estimate of the percentage improvement in their symptoms postoperatively.

Methods:
Retrospective review of 23 patients with implantation of gastric stimulator between 2005 and 2011.  Inclusion criteria were symptoms consistent with gastroparesis, abnormal nuclear medicine gastric emptying study and no evidence of an anatomic gastric outlet obstruction. All patients underwent laparoscopic implantation of the device with simultaneous upper endoscopy. Two leads were secured parallel to each other, 10cm proximal to the pylorus near the greater curvature of the stomach. All cases were successful, and had the stimulator turned on in the operating room. Patient responses concerning their percentage improvement over preoperative symptoms, demographics, and known complications were analyzed.

Conclusions:
Laparoscopic gastric stimulator implantation effectively relieves symptoms related to gastroparesis in patients with idiopathic or diabetic gastroparesis, and an abnormal gastric emptying study. While some complications occurred and results varied, but almost always met the goals and objectives of the patients, who had no other treatment alternative and would generally accept even a small improvement in symptoms. This modality should be considered in all medically refractory or medically intolerant patients with symptomatic gastroparesis. 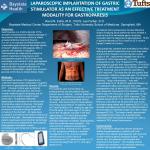