Background. In Japan, laparoscopic distal gastrectomy (LDG) has been widely accepted for the treatment of early gastric cancer. However, laparoscopic total gastrectomy (LTG) is not widely accepted because of the difficulty of reconstruction after total gastrectomy. In particular, making an esopagojejunal anastomosis under laparoscopy is very challenging. Several techniques using circular staplers or a linear stapler for the anastomosis have been reported, but the methods using staplers are not easy enough to perform safely. Therefore, we developed a hand-sewn esophagojenunal anastomosis technique under laparoscopically without the need for a mini laparotomy. To date, we have performed 14 laparoscopic hand-sewn esophagojejunal anastomosis procedures. The aim of this study was to confirm the technical feasibility and short term safety of the novel technique.
Materials and Methods. From June 2010 to May 2011, 14 consecutive patients (8 male and 6 female) diagnosed with early gastric cancer underwent laparoscopic total gastrectomy by a single surgeon at our institution. After radical lymph node dissection, the abdominal esophagus was mobilized and transected with an endolinear stapler. The specimens were retrieved from an umbilical port extended to 3 cm. Reconstruction was made in the Roux en Y manner via the ante- or retrocolic route. First, the jujunojejunostomy was made laparoscopically with the endolinear stapler mixed with hand suturing. The cut end of the abdominal esophagus was opened with laparoscopic coagulating shears (LCS), and a 2.5 cm hole was made at antemesenteric side of the jejunum for anastomosis using the LCS. Finally, an end-to-side esophagojejunal anastomosis was made with hand-sewn single layer interrupted sutures using 3-0 absorbable sutures. After completion of the anastomosis, a leak test was performed for all patients. There were no cases with leaks.
Results. The totally laparoscopic Roux en Y reconstructions with hand-sewn esophagojejunostomies were performed successfully in all of the patients. There were no cases that had to be converted to open surgery. The median suturing time for the hand-sewn esophagojejunal anastomosis was 51.5 minutes (range, 34-85 min), and the median number of stitches was 16.5 (range, 14-24). No anastomotic leakage occurred. All patients were discharged within 2 weeks without any perioperative complications. Endoscopic studies revealed only two cases of anastomotic stenosis. The periods when the anastomotic stenosis at the esophagojejunostomy developed were at 5 weeks and at 3 months after surgery. One patient was under hemodialysis for chronic renal failure, and the another was complicated with polycythemia. Both patients were successfully treated with endoscopic balloon dilatation.
Conclusions. Laparoscopic hand-sewn esophagojejunal anastomosis during laparoscopic total gastrectomy for early gastric cancer is feasible and safe. So far, the most common drawback to this novel technique is anastomotic stenosis. 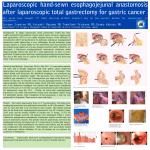