Laparoscopic colorectal surgery in the cirrhotic patients: Safe and feasible

Introduction: Major abdominal surgery in cirrhotic patients is associated with high rates of morbidity (33-77%) and mortality (17-41%). Complications like hemorrhage, sepsis, and metabolic imbalance are common. A 2.59 fold risk for 30-day mortality has been reported in patients undergoing colorectal surgery. Post-operative mortality is increased along Child’s classification.

Advances in laparoscopic surgery have expanded the benefits of MIS to colorectal surgery. Once considered an absolute contraindication, promising outcomes in carefully selected patients have been reported. We present 3 consecutive cirrhotic patients with associated colorectal disease successfully treated by laparoscopy.

Case reports: A 75 y.o. male with known alcoholic cirrhosis. He was admitted for fecaluria and pneumaturia for the last 4 weeks. An abdominal CT scan revealed a cirrhotic liver with dilated portal and mesenteric vessels with splenomegaly and porto-systemic collaterals. Thickening of the sigmoid colon wall and air in the bladder was also noticed. Classified as Child’s A-MELD 11 and underwent a laparoscopic sigmoidectomy with colovesical fistula excision.

An 85 y.o. male with known history alcoholic cirrhosis. He had a 10 m. history of anemic syndrome and weight loss. A tumor was found in the ascending colon on a CT-scan. This same study also revealed splenomegaly and dilated splanchnic vessels.  Classified as Child’s A-MELD 10 and underwent a laparoscopic right hemicolectomy.

Discussion: Management of colorectal disease in cirrhotic patients is not straightforward and data comes from small series. Several reports have demonstrated the feasibility of laparoscopic surgery in cirrhotic patients with similar results to open procedures. After correct metabolic optimization, MIS seems to be safe in compensated patients. 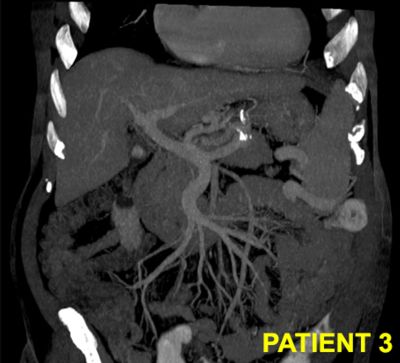