Background
Laparoscopy is being increasingly adopted for elective colorectal resections. Its role in an emergency setting remains controversial. The aim of this study was to compare the outcomes between laparoscopic and open colectomies in acute emergency situations.
Methods
A retrospective review of all patients who underwent emergency laparoscopic colectomies for various surgical conditions was performed. These cases were matched for age, surgical diagnosis and type of surgery with patients who underwent emergency open colectomies.
Results
Twenty-one emergency laparoscopic colectomies were performed from April 2006 to July 2011 for patients who presented with lower gastrointestinal tract bleeding (5), colonic obstruction (3) and colonic perforation (13). The hand assisted laparoscopic technique was utilized in 13 (61.9%) patients with the remaining patients receiving standard multiport laparoscopic colectomies.. A right sided colectomy was performed in 13 (61.9%) patients. There were 4 conversions to the open technique due to dense adhesions.
Comparing the two groups, the operative time was longer in the laparoscopic group (175 vs. 145 minutes, p: 0.06). The duration of hospitalization was shorter in the laparoscopic group (6 vs. 7 days, p: 0.77). The overall post-operative morbidity rate was similar between the two groups (p: 0.82) with only 2 patients in each group requiring post-operative SICU stay or re-operation. There were no mortalities in our series.
Conclusions
Emergency laparoscopic colectomy in a carefully selected patient group is safe and feasible in experienced hands. Although the operative time was longer, the various post-operative outcomes were comparable to that of the open technique. 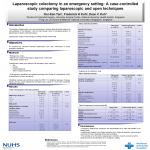