Situs Inversus Totalis (SIT) is a rare congenital anomaly. Its incidence has been reported as 1 in 5,000 to 1 in 15,000. It usually does not have pathophysiological consequences that affect life expectancy and is not considered premalignant. Here, we present a case of SIT and laparoscopic cholecystectomy for acute cholecystitis, later discovered to have cholangiocarcinoma. We highlight the importance of proper understanding of the anatomy and application of the surgical technique to accompolish the task . Situs inversum is a rare condition, often associated with autosomal recessive genetic predisposition (Mayo, 1949). The condition is associated with mirror image transposition of the organs; it can present with or without dextrocardia, called situs inversum totalis (SIT). These changes in location of the organs has shown to influence presenting symptom location and require special diagnostic abilities of all those involved

57 years old female presented to the emergency room with chief complaint of epigastric pain for two days. She denied nausea, vomiting, or diarrhea. Patient’s past medical history includes diabetes mellitus, hypertension, chronic constipation, mental retardation . Patient’s vital signs were within normal limits.Physical finding was diffuse tenderness on abdominal palpation. Patient had a normal white count but did have elevated total and direct bilirubin at 1.3 and 0.6 respectively. Rest of the admission labs were within normal limits .Chest x-ray showed dextrocardia, which was known to patient. CT of abdomen and pelvis was obtained with findings of SIT, which was unknown to patient.

Patient underwent laparascopic cholecystectomy.Position of the surgeon was on the right side.Trocars placement were as follows 12-mm port in subxiphoid area and two 5-mm ports in left upper quadrant. Liver was noted to have nodules . The cystic duct was extremely short. After lysis of adhesions anatomy was delineated; decision was made to perform partial cholecystectomy due to small size of cystic duct and extensive fibrosis. Two large stones were noted and extracted from the gallbladder. Jackson-Pratt drains left in the gallbladder fossa. .Liver biopsy showed invasive adenocarcinoma while Gallbladder was moderately differentiated adenocarcinoma with high grade dysplasia, consistent with primary cholangiocarcinoma

Discussion
Laparoscopic cholecystectomy has become the standard of care for treatment of acute cholecystitis. Techniques for performing laparoscopic cholecystectomy have been documented since 1991 for situs inversus patients. (Campos L., et al, 1991) Whereas, some authors have documented importance of either using “chopstick surgery” or being a left handed surgeon, other studies have proposed changes in trocar site placements or using angled scopes. In any case, it is of utmost importance for surgeons to understand the relevance of anatomy and be capable to handle such cases
. 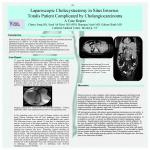