Laparoscopic Bile Duct Exploration in the Managmente of Choledocholithiasis during pregnancy

Introduction: The management of symptomatic choledochal stones in pregnant women is a complex and divisive issue. There a several risks to take in consideration as for any other patient with this pathology, in addition to those risks attributed to pregnancy scenario, such as preterm delivery.

The aim of this study is to show a series of cases of pregnant women with choledocholithiasis and their treatment resolution through laparoscopic cholecystectomy and laparoscopic bile duct exploration.

Methods and procedures: Retrospective study, where pregnant women were admitted with symptomatic choledochal stones confirmed by Ultrasonography (US) or Magnetic Resonance Cholangiopancreatography (MRCP), and were posteriorly managed with a surgical intervention.

Surgery in these cases consisted in a laparoscopic cholecystectomy during which an intraoperative US (IUS) was performed in order to confirm the presence of choledocholithiasis. If choledochal stones were found the surgeon continued to perform a laparoscopic exploration of the bile duct, with assistance of flexible choledochoscopy, preferring the transcystic approach when possible.

The approach for port placement was adjusted to avoid the risk of injury in lower sections of the abdomen by using an open epigastric port for pneuoperitoneum and optic access.

Perioperative morbidity and mortality was assessed, including a perinatal follow up to address complications such as preterm delivery.

In the follow up, only one preterm delivery happened at gestational week 35, with no morbidity associated to the infant. After this case No bile leaks were registered in this series.

Conclusions: Laparoscopic bile duct exploration is feasible and safe for managing choledocholithiasis during pregnancy, especially in highly symptomatic cases who are not suitable for observation. Using a IUS approach also avoids the risk of radiation required for ERCP or transcystic non-endoscopic therapies. The presence of a dilated cystic duct also avoids the necessity of choledocotomy, which would theoretically diminish the risk of bile leaks and strictures. It is also important to show that even with preoperative imaging 40% of patients had negative findings during surgery, which may be attributed to false positives in their imaging studies, or spontaneous resolution of choledocholithiasis. 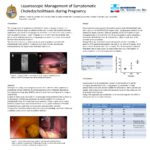